The Port of Prince Rupert has achieved a significant milestone in its emissions reduction measures with expanded shore power capacity at DP World Prince Rupert’s Fairview Container Terminal. New electrical infrastructure was installed at the Terminal’s north berth and upgrades were made to the south berth through a partnership between the Prince Rupert Port Authority (PRPA), DP World, and BC Hydro. The full commissioning of the shore power system now allows ships at both berths to shut down their main generators and rely on specially equipped dockside power connections while their cargo is being loaded and unloaded. The first ship to utilize the new north berth shore power system was the COSCO CSCL Summer on December 12, 2022.

The ability to plug in large container vessels to shore power while at either terminal berth is forecast to reduce carbon emissions by almost 30,000 tonnes annually, as well as other air emissions related to vessel exhaust such as nitrogen oxides and particulates, from the local airshed. That is the equivalent of removing over 6,500 typical passenger vehicles from the road.

The Prince Rupert Port Authority, DP World Prince Rupert, and BC Hydro contributions to the project were supported by $2.2 million in funding toward the $7.6 million project provided through Environment and Climate Change Canada’s Low Carbon Economy Challenge Fund and was coordinated through BMO Radicle.

“Shore power capacity is a critical component of the Port of Prince Rupert’s carbon reduction strategy and aligns with global efforts to transition the shipping and marine industries to renewable, clean energy sources,” said Shaun Stevenson, President and CEO, Prince Rupert Port Authority. “Offering this infrastructure at our Port enables customers to make more sustainable choices about how they transport their cargo and the benefits it will have in reducing their overall carbon footprint.”

“Shore power demonstrates DP World’s commitment to a sustainable operation as we cut CO2 emissions globally by nearly 700,000 tonnes over the next five years,” said Maksim Mihic, CEO and General Manager, DP World (Canada) Inc. “In addition, to the shortest ship crossing from Asia to North America, and the greenest rail connection, this will position Prince Rupert as a leader in eco-friendly port operations. We want to thank our partners as we work together to reduce our impact on the environment.”

The shore power project is a key part of PRPA’s Carbon Reduction Plan, which aims to reduce the Port’s greenhouse gas intensity by 30 percent from 2018 levels by the year 2030 and reach net-zero carbon emissions by 2050. Carbon emissions from marine sources are a key focus for the plan, and local shore power complements other international efforts to improve air quality and abate emissions such as low-sulfur fuel regulations and developing new fuel and technological changes to ocean-going vessels.

The Prince Rupert Port Authority (PRPA) announced today that it has contributed over $94,000 to two unique projects that support research and monitoring of salmon populations in the Skeena River estuary and its tributaries. Read More 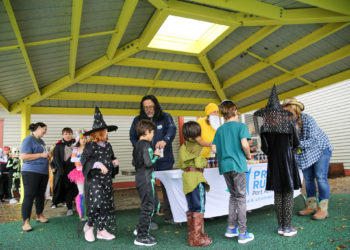 A new outdoor classroom is opening a world of new learning opportunities for Lax Kxeen Elementary School students and the surrounding community. The covered structure was built through a partnership between the Prince Rupert Port Authority’s (PRPA) Community Investment Fund and School District 52 (SD52). Read More